Open House Melbourne Inside the secret corridors of Eildon Mansion

The local residents in St Kilda are familiar with the large building where students of French flock for their classes. Constructed just near the bottom of Grey Street, the mansion stands out against the 60s buildings and the youth hostels which surround it. As part of Open House Melbourne, those interested will be able to take a guided visit with literature professor, Philip Anderson, and architect John Taylor. The two guides give us a glimpse at some of the little secrets of this historic site…

It wasn’t an officer who built the original mansion.

“It was actually a simple British sergeant, Edward Bernard Green, the prototype of a self made man, who acquired four adjacent plots of land in St Kilda and who had a house built on them in 1850-1851” explains Philip Anderson. The man thrived by taking advantage of the principle of Terra Nullius* which then existed in Australia. He took possession of land beyond the Murray River, and then settled in Melbourne in the 1840s. He profited from a contract that gave him the exclusive right to distribute mail between Yass and Melbourne. The Georgian style house would bear the maiden name of his wife "Barham". At the time, the city was surrounded by bush and swamp, but the view of the sea was unobstructed.

When he fell ill, Green decided to return to England. His house was then rented out to a neighbour. “The neighbour in question was William Nicholson, and he later became Prime Minister of Victoria” says Philipe Anderson, an anecdote that illustrates the appeal of the area. At the time, Melbourne did not have a sewage system and was being called ‘Smellbourne’. St Kilda, which was soon to be connected by rail, progressively became a fashionable place to live and… to breath. In 1869, Barham House was sold and its new owner would go on to change it considerably: his name was John Lang Currie. 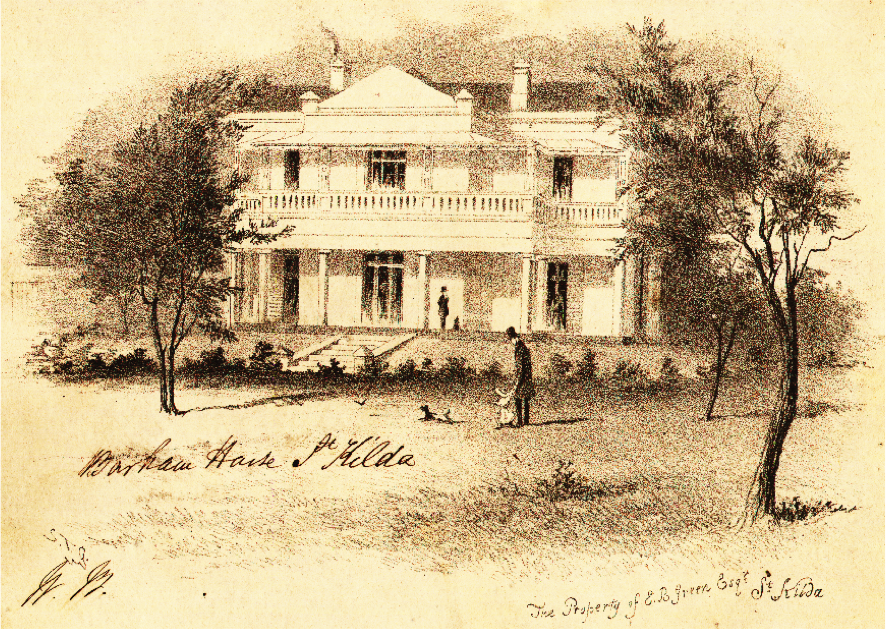 Above: Chalk lithograph of the west elevation (overlooking Port Phillip Bay) of Barham House by S.T. Gill (brother of the architect), about 1855.


Two houses remain… one inside the other.

Mr. Currie most likely came from a wealthier family than Green. What’s more, he made his fortune raising sheep, working the merino wool and taking a close interest in the technical side of his trade. “His wealth allowed him to transform the Georgian building into a Victorian house thanks to the support of well-known architects Reed & Barnes,” says Philip Anderson. The original house is kept, but two wings are added to it, to the north and the south. To compensate for the difference in height between the old and the new parts, an equalizing cornice was placed on the top of the building. The façade was reworked with Greek and Roman inspired details. The interior spaces were vast and so a ballroom was built. The marble fireplaces, mouldings and bay windows added to its grandiosity. In 1877, the building was renamed Eildon Mansion.

Currie died shortly after completing the renovation of his house. His widow moved in with the neighbour who she then married. The dwelling ended up moving from hand to hand, due to the global unrest at the time. “The first world war made employing staff more difficult and the cost of maintaining the family home increased” explains Philip Anderson. Finally, Eildon Mansion became a gentlemen’s guesthouse – “with a billiard room” ads architect John Taylor who points out the consolidating pillars in the basement of the building - and then later a backpacker’s hotel.

In 2006, the old director of the Alliance Française, Edouard Mornaud discovered by chance that the building was for sale when walking his dog. “In the incredible space of two weeks, the board of directors decided to buy it, collected the funds, and participated in the auction,” says Philip Anderson. There followed six months of work to remove the partitions and restore the house to its original state. John Taylor was the architect of this renovation: "we were lucky that the former owner did not touch the mouldings for example, they made our job easier." Eildon Mansion's original beauty and spaciousness was restored: "we simply added the air conditioning, arranged the classrooms and followed all the safety instructions like the ramps or the emergency staircase”. Eildon Mansion also had a vegetable fence put up in its garden and it keeps the historical relics of its glorious past in the basement. The old kitchen where the original vault can still be found has become a concert space often used for jazz nights.

“Staying in St Kilda was important”, concludes John Taylor who reminds us that Berthe Mouchette, the founder of the Alliance Française in Melbourne (the fourth of its kind in the world), lived in the area. “Maintaining this heritage and opening it up to the general public is a great way to keep the story alive”. We hope to see you all there on Sunday the 30th of July.

*If the land belongs to no one, anyone can settle there. Principle abolished in 1992 by a judgment known as the "Mabo decision".