What you need to know about the French presidential election

In case you weren’t already aware, the 2017 French presidential election will be taking place in less than a month in France. French citizens will take to the voting booths on Sunday 23rd of April and 7th of May to elect the next French Président de la République.

This election will decide the successor of Francois Hollande, the outgoing president who has made the choice not to be a candidate for his own succession due to his popularity ratings being at their all-time lowest. 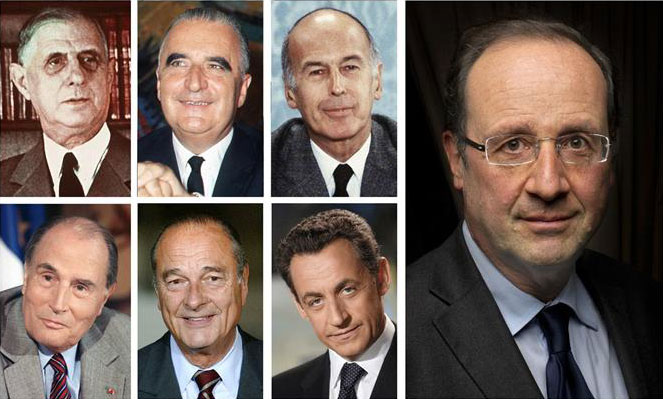 There is one reason why everyone wants to be the president of the French Republic: the role assumes a huge amount of power, more so than the majority of other democratic leaders. In fact, the French president is more like a modern monarch whose reign comes with a time limit. They exercise the highest position of executive power. They are the head of state, the head of the military, the protector of the constitution of the 5th French republic, they have the power to dissolve parliament or even to offer a presidential pardon.

This temporary monarch is therefore elected for 5 years by a direct popular vote. This voting system was put in place in 1962 and the length of the mandate was changed from 7 to 5 years in 2002. If no candidate has attained the absolute majority in the first round of voting, a second round will take place two weeks later where only the two leading candidates from the first round are present. With 11 candidates in the running for the 2017 elections, it’s looking likely that it will head into a second round.

For the first time under the 5th Republic, the outgoing president, Francois Hollande, has chosen not to be a candidate for the succession of his first mandate. This is not surprising considering he has received only 17% of favourable votes since announcing his decision on the 1st of December 2016. The result of the open primaries organised by the two largest parties in France has also brought a surprise: the favourites (Alain Juppé and to a lesser extent Nicolas Sarkozy for the Republicans, Manuel Valls and Arnaud Montebourg for the Socialist Party) have been eliminated by the less expected (François Fillon and Benoît Hamon).

Several traditional parties of the French political landscape are not being directly represented at this election (Europe Ecology, The Greens, MoDem, or even the Communist Party), favouring instead a system of alliances with other major parties.

While the elections in France have for a long time stayed between two major parties, on one side Solidarité et Progrès (SP - François Holland’s party), and the Republicans on the other, this presidential election seems to have shaken up what we have come to expect. To prove it, the current polls place two candidates from other parties at the head, putting The Republicans and the SP in 3rd and 5th position! The eternal left-right divide remains but continues to weaken allowing other voices to be heard.

The campaign has been eventful because of a number of court cases in which certain candidates have been implicated (François Fillon in particular). But, as strange as it may seem from an Australian viewpoint, the indictments aren’t preventing anyone from setting their sights on the presidency of the Republic!

Eleven candidates in the running

154 candidates entered into battle but only 11 candidates have been formalised by the Constitutional Council after having gathered a minimum of 500 signatures from local elected members. Among them, 9 men and 2 women (note the gender parity!)

Five of these are considered ‘major’ candidates

According to the most recent polls, Emmanuel Macron, a centrist candidate is slightly in front of Marine Le Pen, a candidate from the far-right (25.8% against 24.8%), followed by François Fillon, a right-winged candidate (17.3%), Jean-Luc Mélenchon, far-left (13.3%) and Benoît Hamon from the left wing (12.5%).

Once the president is elected, French people will return to the voting booths for the legislative elections on Sundays 11th and 18th of June, in order to elect the MPs of the National Assembly. This election is extremely important for the newly elected President. If his party doesn’t win the majority of seats in the Assembly, his mandate will prove to be much more complicated than expected! 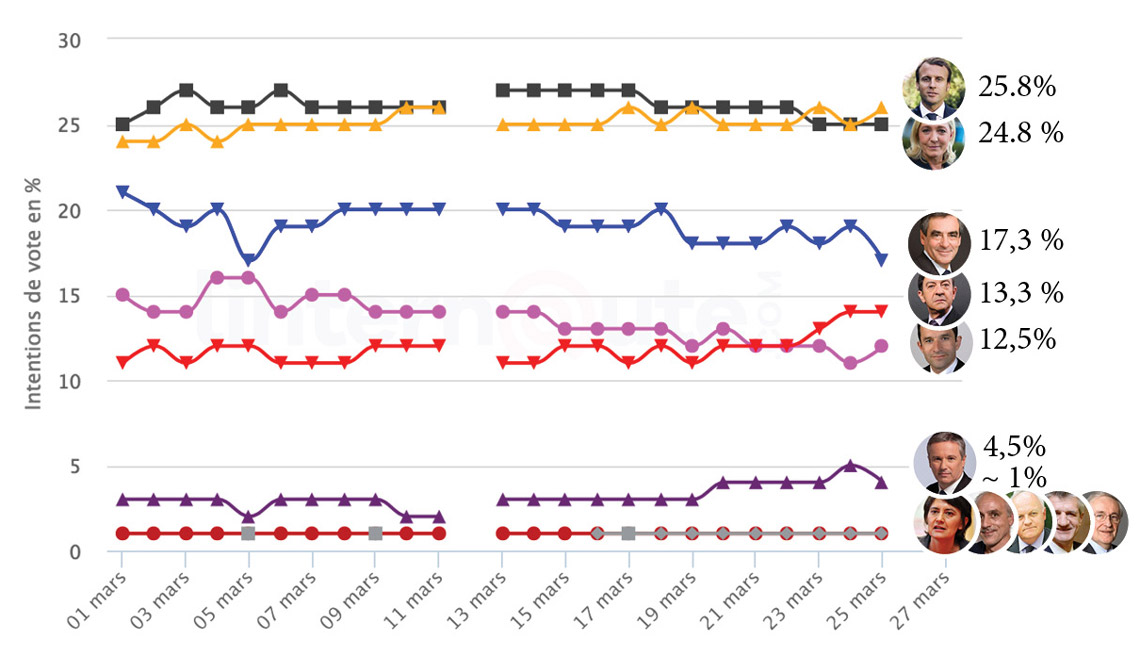 Hypothetical polls for the SECOND round between E. macron et M. Le pen Polls on 24 march 2017