Interview with Carolyn Cardinet, artist and curator of Bleached

The interview below has been transcribed from a radio interview conducted by SBS. This text along with its accompanying podcast will enable you to use it for a listening and reading comprehension task.


From the 2nd of April until the 2nd of May, the Alliance Française de Melbourne is hosting Bleached, an exhibition as part of the Art+Climate=Change 2019 Festival.

Jean-Noël Ducasse: Today we welcome Carolyn Cardinet to our SBS studios. Your exhibition with the Alliance Française de Melbourne (Editor’s note: Bleached) starts on the 4th of April. What is it about?

Carolyn Cardinet: I’ve put together this exhibition called Bleached at the Alliance Française with three other artists including one French artist, Chloé Bensahel, one English artist, Tim Craker, and Carmel Wallace, and an Australian artist born in Mildura. It was after watching the documentary Chasing Coral, which deals with the condition of coral reefs around the world, that I got these artists together for this project which is very close to my heart. Corals are depopulating, dying and turning white. This happens when the small animals living inside the corals leave, causing the corals to lose their life, their light and their energy. Only the structure made of calcium carbonate remains. In 2016 and 2017, two devastating hurricanes swept through Queensland, killing most of the corals. This kind of thing happens not only in Australia but the world over. I think that about 90% of The Great Barrier Reef’s corals are now dead. Unfortunately, corals take many years to grow, at least thirty. It will therefore take a long time before we can see the coral reef as it initially was

Jean-Noël Ducasse: This exhibition is happening as part of the Art+Climate=Change 2019 Festival, is that right?

Carolyn Cardinet: Yes, exactly. Some exhibitions have already begun, ours will start on the 4th of April and as part of it we will also be showing a documentary called Murder on the Reef.  It will air at 6pm on the 30th of April, at the Alliance Française. You will need to book online for this event. The documentary was made by some biologists and not by one of us four. Generally speaking, these kinds of documentaries are made by divers who revisit sites and witness firsthand the devastation happening the oceans. And just like Chasing Coral, this documentary leads us to rethink what we are doing, notably with regards to pollution. It is in light of this that the exhibition was created.

Jean-Noël Ducasse: What are we going to discover in this exhibition?

Carolyn Cardinet: For my part I am going to use recycled plastic, as I usually do, that I will this time assemble in order to recreate a white barrier reef. Tim Craker will install a collection of differently sized second hand tables in a broken line, on top of which there will be piles of white porcelain collected from local op shops. This will create a certain Baroque opulence, but at the same time retain a cold and dead structure. This will serve as a memorial to the coral reefs which are dying around the world. As for Carmel Wallace, she will display her installation called Undercurrent. She has already worked on the subject of thrombolites, which are found in the temperate climates, south of Australia. To do this she is going to arrange recycled objects in front of a projected film about thrombolites. Chloé Bensahel lives in Washington in the United States but is currently undertaking an artist residency in Gobelins [translator’s note: a school of visual communication and arts] in Paris. For this project she has woven a fishing net with a string made from paper. Her installation makes reference to overfishing. Fishers trawl their nets on the seabed and tear up corals which can be years, if not centuries old.

Jean-Noël Ducasse: Could you tell us a bit about the four artistic residencies that you have done in the last year? What projects have you worked on?

Carolyn Cardinet: The projects have all been different. First, I embarked on a collaboration with an American artist in Washington. We created Moon Cocoon, with silvery insulation paper. I was also invited to the Australian Tapestry Workshop in Melbourne, which Chloé Bensahel also attended. I worked on a collection of 12 articles of clothing bought from op shops (dresses and coats), fitted and restructured with plastic. That collection was presented at Melbourne Fashion Festival in 2018. Then I went to Ballarat for the fantastic Biennial of Australian Art, which lasted for a month. During this residence, I created 5 giant brooms, a metaphor aimed at inspiring people to clean up the plastic in the world's oceans. This installation is now showing in Sydney. At the end of the year, I spent 12 weeks in Ballina near Byron Bay in order to create projects with the community. We did river clean ups, artist talks, and I also went to schools to host workshops to teach children about sustainability. I spent two amazing months within the Ballina community. I also collected objects made of plastic that I had found in the street which I then catalogued. During a river clean up, we found 1,240 cigarette butts in 45 minutes, for instance... In 2019 I got off to a flying start at the Sustainable Living Festival and Whittlesea Community Festival with installations and workshops for children during which we created fish out of milk bottles.

Jean-Noël Ducasse: What do you think of the fact that supermarkets have stopped offering single-use plastic bags?

Carolyn Cardinet: We are slowly getting there. But there are still bags that can be bought for 15 cents, that end up in the street and which are probably only used once or twice. I think that it is up to the general public to change their way of doing things by remembering to bring reusable bags or using cardboard boxes that are already available. Supermarkets still use a lot of plastic, especially for fruits and vegetables, which seems unnecessary. It is more complicated for other types of packaging, but we will get there in the end. 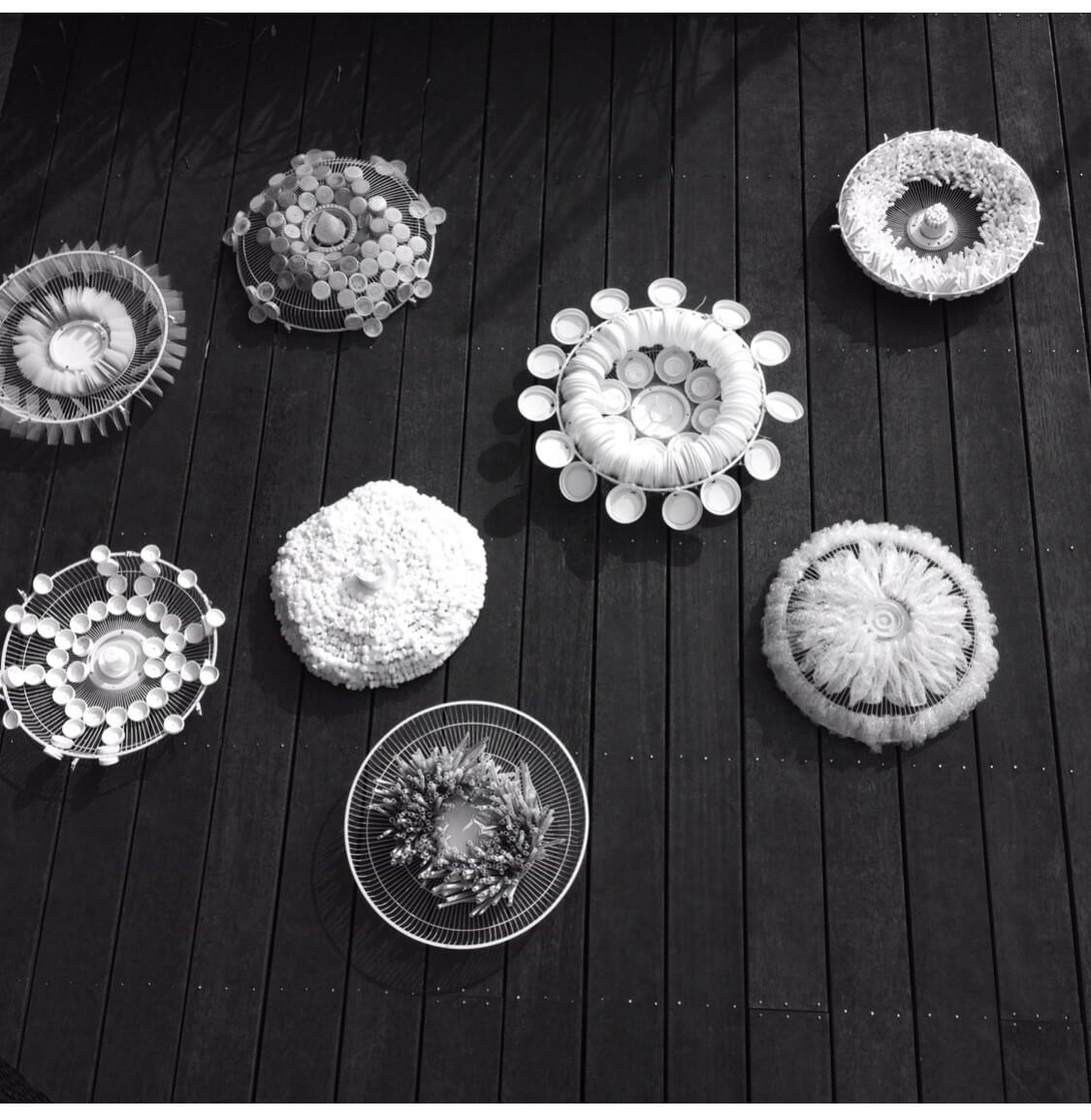 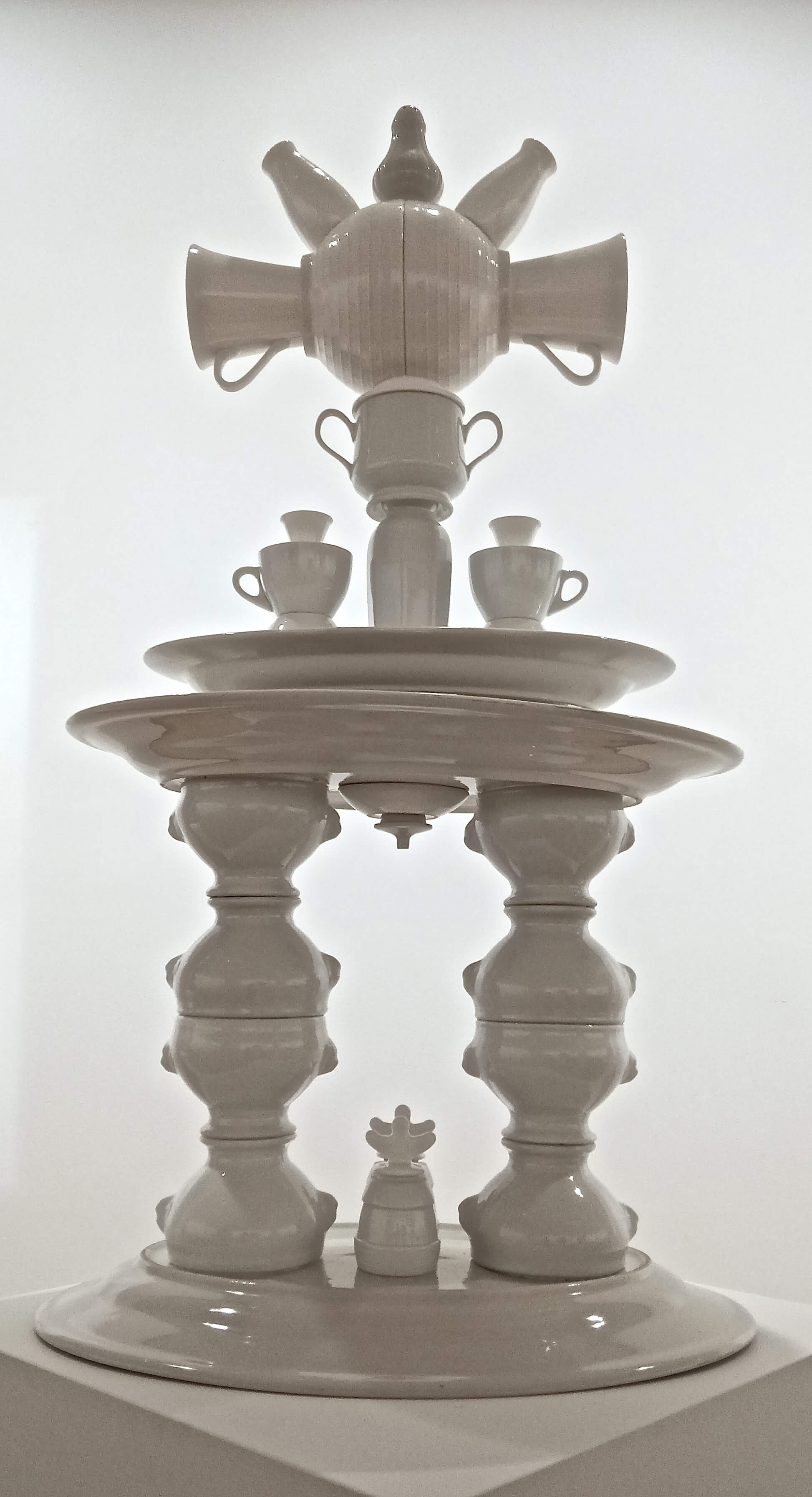 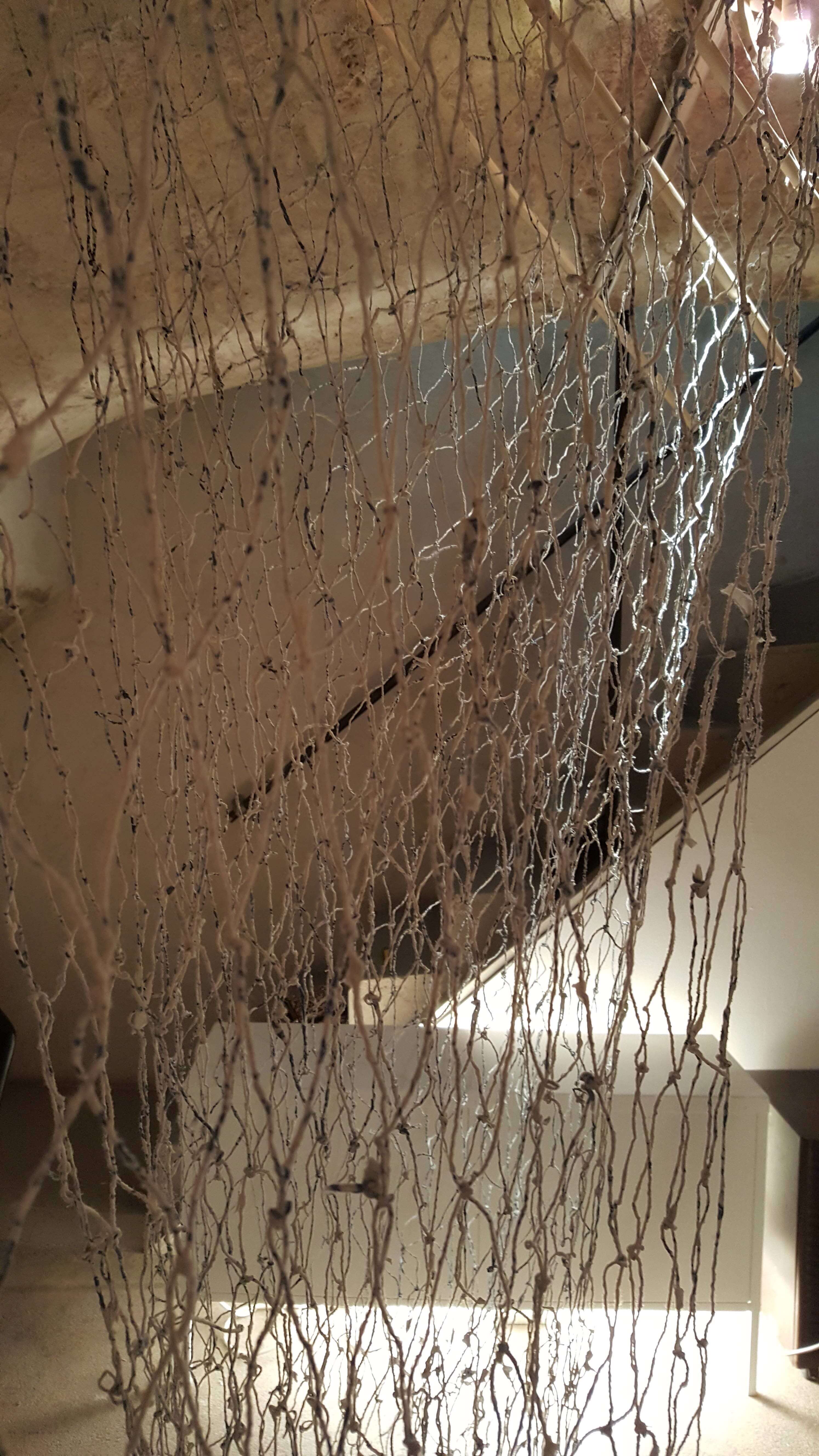 Chloé Bensahel, The only thing I know for sure is that I don't know, 2016 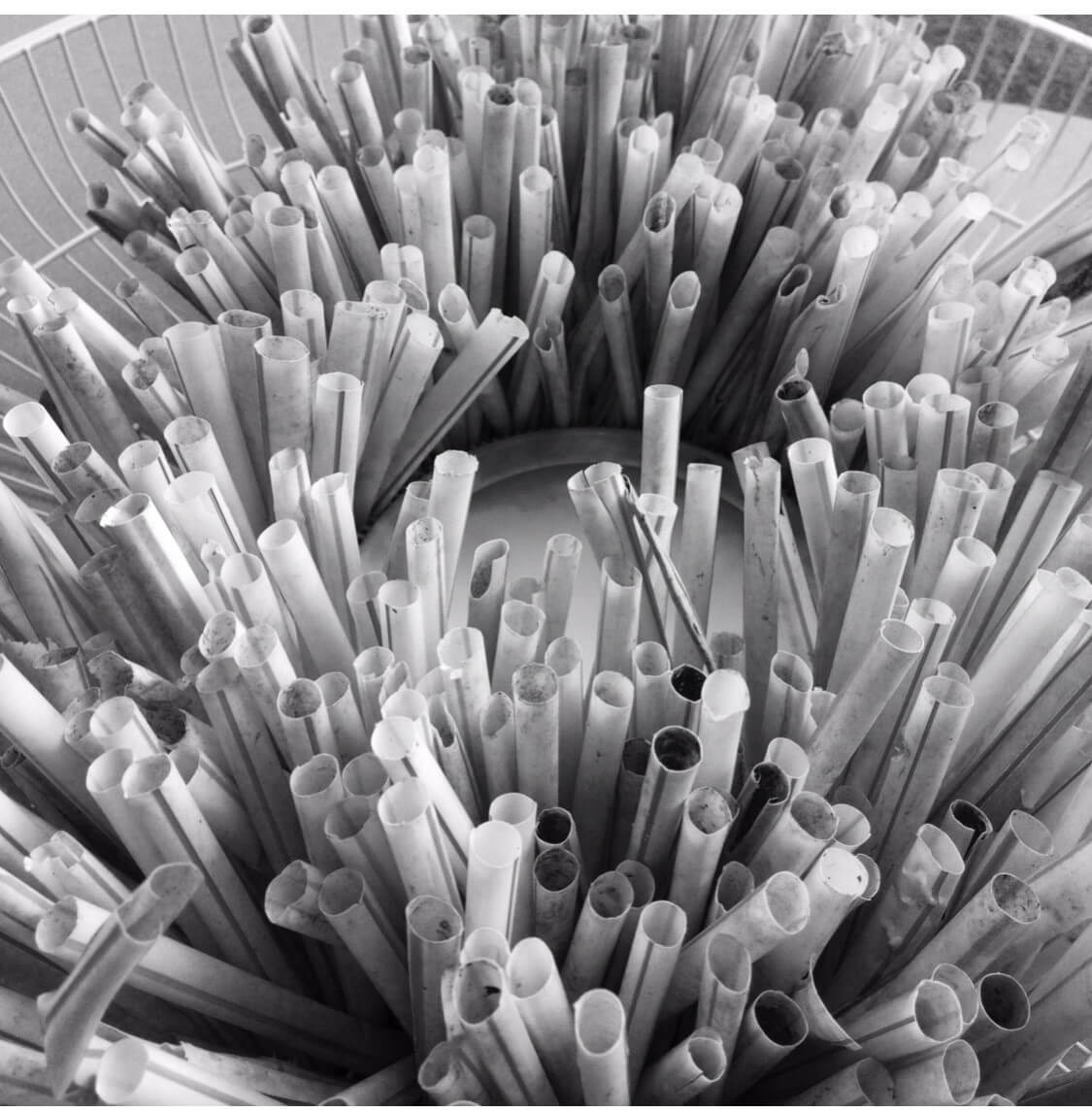 The Great Barrier Reef, set of reefs 2,300 km long located at the North-East of Australia, was struck by two bleaching waves in 2016 and 2017. Under the pressure of environmental factors, stressed corals expel the small seaweeds with which they have a symbiotic relationship that gives them their colour and their energy. Before, the interval between two bleaching episodes was 25 years, leaving enough time for the corals to regenerate.

According to Terry Hughes, an Australian expert in marine biology, the main reason for the mortality and bleaching of corals is the increase of water temperature caused by global warming.