The Alliance Française de Melbourne purchased Eildon Mansion in August 2006 and moved there in July 2007 after a year of renovations.

In 1871 pastoralist John Lang Currie (1818-1898) commissioned the prestigious Melbourne architectural firm of Reed & Barnes to completely remodel and extend the existing Barham House* at 51 Grey Street, St Kilda. Currie, one of the greatest sheep breeders and landowners of the western district of Victoria, who owned the property “Lara” near Camperdown, effectively retired to St Kilda in the late 1870s, then regarded as Melbourne’s most prestigious suburb. The central section of the building (the original house) was built in 1850, barely 20 years after Melbourne was founded, making it one of St Kilda’s oldest houses.
The mansion, named Eildon in 1877, has retained extensive original internal features such as sandstone, marble and timber mantelpieces, ceiling roses, bay windows, large basement quarters for servants and a cellar.

Eildon Mansion was owned by Mr Ferit Ymer from 1951 (He leased the property in 1950) until it was sold to the Alliance Française in 2006. Mr. Ferit Ymer and his wife Qerime Ymer, raised their 6 children at Eildon Mansion, while they ran Eildon Mansion as a boarding house. The Ymer family ran the boarding house successfully during the 50s, 60s, 70s and 80s. The accommodation was mainly for single or couples on business or new immigrants arriving in Melbourne. In the later years the accommodation business declined, as did the quality of the building. Two of the owner's sons, Enver and Danny, undertook extensive restorations in 2004. They converted the business into a backpackers accommodation. In 2006 the house was bought by the Alliance Française.

The Alliance Française now use Eildon Mansion as its new Melbourne headquarters. From 2006 until 2007, the Alliance Française undertook some extensive renovations of Eildon Mansion. They have restored many additional areas of the property: opened all the partitions (these were placed to create more rooms in the 1930s), set up the mansion for their French classes and their media library and retained an atmospheric basement room (the old kitchen) which holds cinema, concert and conference events. They have reopened the magnificent ballroom, which is now used for functions and gallery exhibitions.

Eildon Mansion has become a sign of what has happened to St Kilda over the years. Once a very classy seaside prestige suburb, it became very run down, and in some places derelict, to now a very cosmopolitan suburb, where hundreds of people go to live, see and enjoy.

* According to the book 'The history of Barham' by T.R. McConnell, (published 1951) "Edward Bernard Green acquired the lease of 114,656 acres of land. Green named it Barham - his wife's maiden name. (Barham is now a sprawling metropolis on the border of NSW and Victoria.) Previous to acquiring Barham station, (from which the town of Barham was named), Mr E. B. Green built a palatial home on an area of thirty acres in Grey St, St Kilda. This dwelling was also named Barham and was amongst the first batch of buildings insured on April 3 1849, by the Victoria Fire and Marine Insurance Co."

Are you interested by hiring the venue? Find out more. 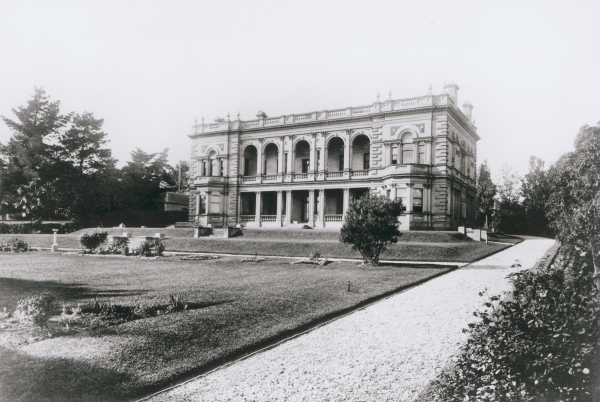