Christmas in France: A Continuing Tradition

Originally a pagan tradition, then later Christian, Christmas is a time of togetherness for French families. The French gather for Christmas around a dinner table filled with dishes that are typical of the festive season. They start celebrating in advance, enjoying the Christmas spirit throughout December thanks to the Christmas markets and street decorations that light up the towns and cities of France.

For many families, the evening of Christmas Eve is as important as Christmas Day. The evening is spent with family enjoying a dinner which, traditionally, can comprise of foie gras and sea food for entrée, turkey stuffed with chestnuts served with vegetables and pommes dauphines (a traditional French recipe made of balls of fried mashed potato wrapped in choux pastry) for main and, finally, a Bûche de Noël for dessert. Also known as a Yule log, this is a dessert that, as its name suggests, takes the form of a log. Its shape recalls an ancient tradition where a large log was placed in the fireplace and would burn until the end of the evening. Today, there are many versions of this dessert, from ice cream and rolled cake to chocolate and fruit.

At midnight, some families will exchange presents while others will have to wait until Christmas morning…

The Christmas tree tradition first appeared in France in Alsace, near the German border, in the 7th Century. By the end of the 19th Century, the tradition had spread across France. Christmas presents are placed under trees decorated with tinsel, baubles and other ornaments.

In France, it is not Santa Claus who brings children presents but Père Noël (Father Christmas)! The idea is the same: he crosses the entire world on his sleigh, sliding down chimneys to deliver his presents and leaving them at the foot of the Christmas tree on the night of Christmas Eve. Or at least, that’s what children are told!

In France, the tradition of Christmas markets dates back to 1570, the year of the first Christmas market in Strasbourg, Alsace (once again!). The event spread little by little across France, in particular during the end of 20th Century.

Today, Christmas markets generally run from the end of November to the end of December. They are often fitted out with little wooden cabins that are built, decorated and lit up especially for the occasion. The stall holders sell food, regional and/or artisanal products, decorative items, toys and other gift ideas for Christmas, for children and adults of all ages.

The Christmas markets often take place against a sound track of Christmas carols and offer a wide range of activities. Despite the wintery weather, it’s a must to spend at least one evening exploring the markets with a glass of mulled wine in one hand and a slice of gingerbread or roasted chestnuts in the other! Often, a guest of honour makes an appearance and adds a special something to the atmosphere: the snow!

From Strasbourg to Melbourne!

In France, the most famous Christmas market is Christkindelsmärik (Market of Infant Jesus), in Strasbourg. This year it is celebrating its 445th anniversary! More than 300 market chalets are assembled together each year for the enjoyment of over two million visitors! If you can only visit one Christmas market, make it this one or, if that’s not possible, another Alsatian Christmas market.

If you are staying in Australia this Christmas, don’t worry! The Alliance Française of Melbourne is hosting its own, summery version of a Christmas market! Join us on 5-6 December 2015 in St Kilda to celebrate Christmas the French way! 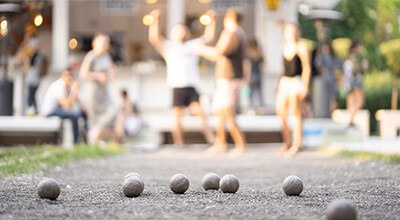